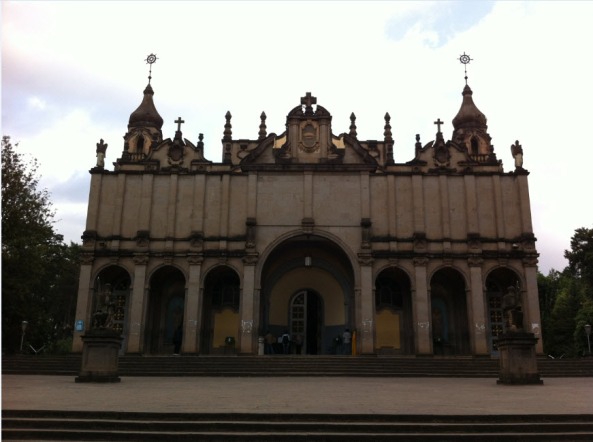 The Holy Trinity Cathedral, also known as the Kiddist Selassie Cathedral,  is the second most scared place in Ethiopia, after the Old Church of St Mary of Zion in Axum.  The cornerstone of the Church was laid by Haile Selassie in 1933.  The church is extremely large and from the outside it bears an Arabic facade.  Stained glass windows line either side of the church on the inside, representing each of the ten commandments and scenes from the Bible.  The people in the stained glass windows are white – turns out because the windows were manufactured in Belgium and imported.  Modern and medieval ecclesiastical Ethiopian paintings decorate the inside of the church.  Inside the church lie the tombs of Emperor Haile Selassie and his wife Empress Menen Asfaw.  The Aksumite-style granite tombs are comprised of three sections: the bottom which are the feet of the tomb and represent the feet of the Lion of Judah.  The Second part of the tomb, the middle is inspired the geometrically perfect church at Lalibella, and the third and final part – the high top part is representative of the towering sandstone slabs erected at Aksum.  Selassie was brought here in 2000, twenty five years after his death.  He was originally buried next to a toilet by his killers, but later exhumed and buried in a small coffin in the Menelik Mausoleum.  At his reburial in 2000, many Rastas attended from around the world, including Rita Marley (Bob Marley’s widow) who said that there is no end to the reign of Haile Selassie.

I met a couple of Rastas in Arba Minch, about a 12 hour bus ride south of Addis Ababa, who told me that Rastas do not believe that Selassie rests here.  Rastas believe that Selassie is God and therefore lives on.  They quoted several things which they believe is evidence that Selassie isn’t dead: his so called killer, Mengistu (leader during the Derg period) denies killing Selassie, American experts claim the bones of Selassie are too large to be his, and in addition to this there have been sightings of the former Emperor in Aksum, London and India, all after his death.  When I asked them about Rita Marley, Bob Marley’s Ratafarian wife, interestingly they were somewhat scathing towards her.  She claims that Selassie lives on; but if you believe this, then why would you attend his funeral?  She also wants to dig up Bob’s bones and re-bury them in Ethiopia which they didn’t approve of, and in addition to this, they believe that she is selling Bob’s image and using it as a form of branding in order to gain money.  The fact that she has put his picture on beer (real Rastas don’t drink alcohol) disgusted them.

Outside, within the grounds of the church, many tombs and monuments are dedicated to victims of the Derg (communist regime following Selassie’s death), soldiers who died while resisting the Italian occupation and British soldiers who died during the campaign that ended the occupation.  Sylvia Pankhurst’s grave is also here, and some Ethiopian aristocrats are also buried here.  Pankhurst was the first non-Ethiopian to be buried in Ethiopia.  She was an active supporter of Hailie Selassie and researched and published significant works on Ethiopia art, culture and history.

Entry to the Cathedral was something like Birr 30 and you pay on the way in at the booth on the left of the driveway/entrance.  Watch out for seedy guys who give you their business cards and claim to offer guided tours around Addis….because when you look at the cards, the guided tours are actually sex tours…